Redis Database is now available on our web-hosting environment!

We are happy to announce, that we have implemented the support of Redis databases on our web hosting environment! Redis, which stands for REmote DIctionary Server, is one of the most popular key-value stores on the web.
Also, Redis occupies the 4th position on the NoSQL database users’ satisfaction chart and ranks among the Top 50 Developer Tools & Services.

As usual with iClickAndHost, you can easily deploy Redis to your web hosting account by few simple mouse clicks within the Hepsia Control Panel.

What is the Redis database?

The Redis database is a real innovation in the world of structured storage systems. Here is a list of few of the innovations and specifics that have helped Redis outjump all other popular key-value data stores:

Redis allows data to be processed at the database level rather than at the application level.
Its unique architecture allows for faster execution times and increased CPU, I/O and network utilization levels.
In contrast to other key-value stores, Redis allows applications to carry out complex tasks such as computing set intersections or range analyses using simple commands

Based on the C language, Redis is optimized for execution with O (1) complexity.
Opposed to standard databases, which write every change to disk, Radis normally holds the whole dataset in its memory.
This in-memory design allows it to provide the highest throughput (millions of operations per second) at the lowest possible latency level (< 1ms), which makes for a far more efficient hardware utilization.

Thanks to the available add-ons and extensions, Redis can serve multiple data processing purposes – from querying secondary indexes to serving machine learning and AI models.

Developers can select from a variety of available out-of-the-box Redis Modules.

Redis usually keeps the entire dataset in memory. For consistency to be achieved, the dataset needs to be transferred from memory to disk from time to time.
Depending on the particular case, this can be done in two different ways:

It is worth noting, that Redis writes the data to a file system at 2-second intervals, so in the case of a disaster and system / disk failure, only a few seconds of data will be lost.

At the base of Redis replication there is a very simple to use and configure master-slave replication that allows slave Redis servers to be exact copies of master servers. The slave will automatically reconnect to the master every time the link breaks, and will attempt to be an exact copy of it regardless of what happens to the master.

All Replication methods and benefits are described at the Redis official page: Redis replication

Other key Redis features include:

Redis can be beneficial for many practical purposes. Here are just a few of the most common uses of Redis:

How to deploy Redis on our web hosting platform?

Naturally, thanks to the flexibility of our ownweb hosting environment, you can deploy Redis with a few mouseclicks and manage it entirely via the GUI. You fill find Redis under the "Advanced" tab in our custom-built Hepsia Control Panel.

To enable Redis for a given project, you will need to create an instance first.
In the Redis section, click on the "Create a new instance" button and then select the ‘Add’ button in the window that comes up next: 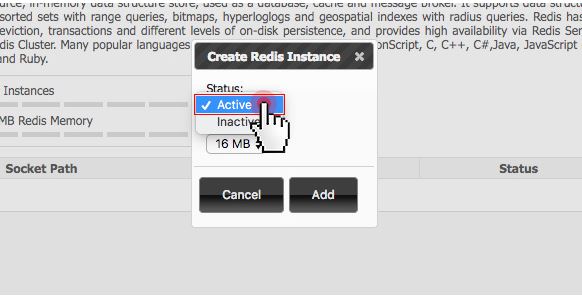 Once the instance has been created, you will see it listed in the newly-created Redis section below:

Redis is included by default with the Ultimate and Unlimited web hosting plans and is available as an upgrade with the Starter and Business packages.

Also, Redis comes included with all Semi-Dedicated and Dedicated Servers as well as with the whole range of OpenVZ VPS packages.

Redis Database is now available on our web-hosting environment!
Rate this page